When you insert a photo of a person on a slide, often that photo doesn’t show the entire person. Part is cut off. For example, the photo might be a head shot or just show the top half of the body.

But placing that photo in the middle of the slide looks awkward. Your audience wonders about the part of the photo that’s missing. Note that this slide also violates my 3-side rule.

Move the cut-off side to the edge of the slide But the photo still violates the 3-side rule and so here’s another solution — remove the background. Doesn’t this look better? On the other hand (I guess that’s a pun!), this next slide looks best at the top of the slide because the cut-off is at the top. So the solution is to move it to the top and put the text at the bottom. What if I can’t move the image to the edge of the slide?

Sometimes, you just can’t move the image to the edge of the slide. Perhaps you need to label the photo or you need to put 2 photos on a slide. In this situation, add some formatting to the photo that lifts it off the slide and gives it some type of edge of its own.

In this case, the photo needs a label on its right side. But simply add a shadow makes it look less awkward. I’m not sure how to explain why this looks better. Do you see the difference? 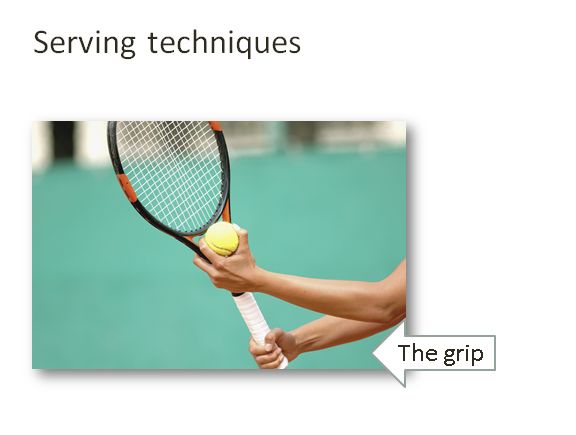 Leave a comment and let me know what you think of this technique.

I love these examples with pictures that are cut off. One thing I’ve done is add graphics that make a wall…as if the person is standing behind a half wall. Hope that makes sense.

Peggy,
Yes, that’s a great idea. In a sense, you’re creating your own edge.

Ellen: I love your tips. They go way beyond the usual–“limit the text and increase the font size.” I’m one of those people who can tell when a PowerPoint presentation is great, but I often can’t put my finger on exactly why. You don’t just tell people what to do and why, but you also tell them how. As for your shadow technique, it took me awhile to find the shadow you were talking about. I kept looking inside the photo. I think the reason it looks better is because the shadow puts the 2-dimensional photo into a 3-dimensional environment,… Read more »

Thanks for these ideas. I’ve also taken the image, filled the screen with it, and put in grayscale behind the smaller one. It’s hard to describe, I guess, but it creates an “echo” effect that works in some situations.

I gave the same advice to a colleague earlier this year. I told her to “anchor” her images. This spells it out more clearly. Glad to know I was on the right track!

Matthew,
“Anchor” is a great word to describe it! Thanks for the comment.

Lisa, I really like that idea. It can be also be used for oddly shaped images that can’t fill up the entire slide — you can crop the grayscale one to fit. Another idea is to put a blurred version of the image behind — that’s easy in PowerPoint 2010. (Or grayscale and blurred!)

Another design move I use is to lay the image on a shape that has been filled with a complimentary or contrasting color.[No outline on the shape.]

The shape also provides a nice background for text.

This move prevents an image from ‘floating’ in the middle of the slide.

I should have added that the shape I use as a backdrop for the photo is always a rectangle or square depending on the shape of the photo.

And the shape extends to the edges of the slide.

Mike, Care to send me a screenshot?

I agree with other people’s comments about how practical and detailed your advice is, Ellen, so thanks!

The effect Mike describes in his comment sounds like a “belly band” design, as shown here: http://www.ellenfinkelstein.com/pptblog/add-design-flair-with-a-belly-band/

Mike,
Thanks for sending me those examples. They all look great. I chose one that includes a cut-off photo, in this case, of a clock. You’re right, this is another great way to “frame” the photo so it doesn’t appear to be lost on the slide.

Sandy, any compliment from you is greatly appreciated! (Sandy is a fellow PowerPoint MVP and an amazing designer and animator.)

Craig,
You’re welcome. And I so appreciate it that you know the content on my site well enough to link to another tip! Michael Schwartz’ slide is a good example of a belly band technique.

No worries, Ellen! The reason I remembered the belly-band post is that it really struck a chord with me when I read it, because it was so simple yet so effective. When I see a great tip like that anywhere, I keep the URL (with a short note about the tip) in a file for later use. It keeps me learning!

Craig,
It’s great that you’re so organized! Recently I did a survey about webinar topics and someone (totally off topic) asked for a way to keep track of all my tips. When you say “a file” do you mean an electronic one?

As Eugenia mentioned the shadow creates a 3-D environment. What I see is that it creates two slides, the foreground photo slide and the background white canvas slide. In effect, the photo now fills its own slide and doesn’t look cut off. A common problem I run into is placing vertically formatted photos onto slides. In addtiion to shadows I have had good luck with simply using PowerPoint 10’s photo frames. I try to match or compliment the frame color to a color in the photo. Dark backgrounds really make the photo popout. Thanks for all your dedication to the… Read more »

I’m a little late reading this, but I like the concept. I’m wondering, however, on the tennis slide with the drop shadow. As the arrow lies both on the photo and on the background, should it, too, have a drop shadow? I played around with this same graphic and thought it looked more realistic when the arrow had a shadow as well. I do a lot of digital scrapbooking and shadowing is a big factor in adding realism. Just a thought.

Lara, Good point! In this case, I agree with you. Sometimes, you want to create the effect of one object above another, but because the arrow is in front of the image, I think it should also have a shadow. Thanks for taking the time to work with this!

Thanks for every other magnificent post. Where else could anyone
get that kind of info in such an ideal method of writing?
I have a presentation subsequent week, and I’m at the search
for such information.

what??? this is ridiculous… why is it cutting off? why can’t you resize the picture? this was really dumb and not helpful at all.

Wow, I’m extremely late to answer your question of September 3, 2012! Sorry about that. When I say I keep tips in a file, yes, I mean an electronic one. I use a Word document.

For many years, I’ve been adding to it, and I find it extremely handy to be able to search it for keywords relating to any issue I come across, down the track.